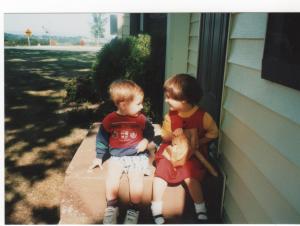 Tom was calling from a pay phone at a grocery store near his office. (no one had cell phones then!) His voice was quiet, but the distress and anxiety were close to the surface. I heard something else, too…a  clear tone of resolve. This steady determination, though barely perceptible, had been accessed, and I found relief in this part of the chord. It had been missing for so long.

“What’s going on?” I asked, my heart racing.

“I can’t work for this man any more…” he began.

“Okay,” I began, ready to begin my supportive litany of possible next steps.

…and I think we should move to Ohio,” he finished.

Without hesitation, the words leapt from my soul and shocked me as they came out of my mouth: “Okay. That’s what we’ll do.”

Tom continued, “But the new house…the plans…I’m so sorry.”

That new  house. I wanted it so much. I had planned each sun-filled room, envisioning us there for years to come… Imagining our parents coming to visit…anticipating more babies to fill the bedrooms…wondering how many of the kids’ future teenage friends might fit in the rec room for a surprise party…

And in an instant, it didn’t matter. Nothing mattered, except for helping Tom…and God gets the all the credit. Only He could have changed my attitude in that moment. I had dreamed about that house every day for years, even before we had saved enough to hire the architect. It was my heart’s desire! In human terms, this change would have been insurmountable. (We’re talking parting-of-the-Red-Sea level of difficulty here. I’m telling you, I was STUCK on that house!) But God did it, and it was the greatest lesson in obedience I have ever had.

So, in the weeks that followed, we contacted the realtor to let her know our change of plans. We paid the architect the balance of what we owed, plus a penalty for cancelling the project. I learned how to do internet job searches for Tom, and he reviewed the possibilities when he came home each evening. We told our parents our plans, and they connected us with colleagues for networking. And, a dear friend of my parents’, a former corporate recruiter, took Tom under his wing, urging him on and encouraging him as he slowly regained his confidence.

This search consumed the summer. Tom sent out resumes and had phone interviews. I haunted the mailbox each day, hoping for a response that would give him hope. (and yes, I held letters up to the lamp in the living room to read them before Tom got home. All in the name of support and solidarity, of course.)

And then, just as the leaves were beginning to crunch under our feet, it happened. A letter. A phone interview. A plane trip, and then another. More phone calls, and more praying and waiting, and there it was~ an offer!

The architect’s plans, carefully rolled up and bound with a rubber band, had begun collecting dust in the hall closet.